What are fasteners made from?

Fasteners are manufactured in a wide range of materials from common steel to titanium, plastic and other exotic materials. Many materials are further separated into different grades to describe specific alloy mixtures, hardening processes, etc. In addition, some materials are available with a variety of coatings or platings to enhance the corrosion resistance or alter the appearance of the fastener.

Why are different materials used?

The material can be important when choosing a fastener due to differences between metals in this case for strength, brittleness, corrosion resistance, galvanic corrosion properties and, of course, costs.  At Valley Fasteners we predominantly sell steel bolts and set screws due to its robust longevity for industrial uses.

Should you use the same type of fastener your replacing?

When replacing fasteners, it is generally best to match what you are replacing. Replacing a bolt or set screw with a stronger one is not always safe. Harder bolts tend to be more brittle and may fail in specific applications. Also, some equipment is designed so that the bolts will fail before more expensive or critical items are damaged. In some environments and applications, sea salt, wet weather and galvanic corrosion must also be considered if changing fastener materials. (See Metal Reactions -below)

What is difference between a bolt or set screw?

A bolt or a set screw only differ due to the thread length.  There is thread the entire length of the set screw, whereas a bolt is only partly threaded at the end and has a shank up to the head.  We sell both and they can be requested per the customers requirements and application.

What are the properties of Stainless Steel fasteners?

What are the different grades of Stainless Steel?

304 Stainless Steel: contains 18% chromium and 8% nickel, combined with a maximum of 0.08% carbon. It is defined as a Chromium-Nickel austenitic alloy. Grade 304 is the standard "18/8" stainless that you will probably see in your pans and cookery tools.

What are the different types of Steel fasteners?

Steel is the most common fastener material. Steel fasteners are available plain (black) as well as with various surface treatments such as zinc plating and hot dip galvanizing.  Plain steel bolts offer no corrosion resistance and will rust over a short period of time.  Zinc plated bolts have a thin protective coating, where galvanised bolts have a thicker coating.

What is Zinc plating?

Many steel fasteners are electroplated with zinc for better corrosion resistance. Fasteners that have been zinc plated have a shiny, silvery or golden appearance, referred to as clear or yellow zinc respectively. They are fairly corrosion resistant but will rust if the coating is destroyed or if exposed to a marine environment.

What is Hot Dip Galvanizing?

Galvanizing is another coating involving the application of a layer of zinc. Hot dip galvanizing puts the thickest possible coating on the metal, resulting in superior corrosion resistance. Due to the thickness of the coating hot dipped galvanized bolts are not compatible with other nuts. Galvanized nuts are tapped slightly larger than other nuts to accommodate this coating.  Hot dipped galvanized fasteners are frequently used outdoors, especially in coastal environments.

What are the different Thread types?

There are many forms of threads but two types are in common use on fasteners. Machine Screw Threads - used on bolts, set screws, machine screws and designed to mate with preformed threads in nuts or tapped holes...  And Spaced Threads - used on woodscrews, self-tapping screws, coach screws and Type 25 thread cutters.  At Valley Fasteners we carry a wide range of all the above to suit any application for your job or project, just follow the link to products and fasteners.

What is the Pitch of a bolt or set screw?

The pitch is best described as the distance between threads, radially measured, between sharp crest and sharp root diameters. The distance measured parallel to the thread axis, between corresponding points on adjacent threads, is the thread pitch. Unified (US) screw threads are designated in threads per inch.  Metric threads are measured in mm, 1.5 means that the distance between one thread and the next is 1.5mm. In general smaller fasteners have finer thread so they have lower thread pitch.

What does SAE, UNF and UNC mean?

SAE stands for the Society of Automotive Engineers. The SAE was founded in 1905 by Andrew Ricker and Henry Ford. It was designed as a way of having one standard thread size that was to be used by scattered individuals when designing parts for the cars from different parts of the country. There are two general types of SAE bolts (sometimes referred to as machine screws). UNF (Unified Fine thread pitch) has more threads per inch than the same diameter bolt in the UNC (Unified Coarse thread pitch).

What is a Metric thread?

Metric or ISO screw threads are the most commonly used type of general-purpose screw threads worldwide. They were one of the first international standards agreed when the International Organization for Standardization was set up in February 1947 after the second World War.  The M used in describing a bolt or set screw is best explained as mm, for example M8, simply means 8mm.  Metric thread measurements comes in two sizes, like SAE bolts with UNF and UNC you have Metric Fine and Metric Coarse.

Metric thread callouts are fundamentally different because the thread pitch (distance between each thread, in mm) is specified instead of threads per inch or per mm. For example, an M10x1.5 (coarse) thread has a 1.5mm pitch, while an M10x1.25 (fine) thread has a 1.25mm pitch.

Can you tell if a bolt is Metric or Imperial by looking at the head?

Have you ever noticed that bolt heads have lines or numbers on them and wondered what do those mean? Nuts and bolts are graded on the material that they are made of. The larger the grade the stronger the bolt/nut. Imperial bolts or SAE have a different grade rating system than their metric, or ISO, counter parts, however the same holds true for metric, the larger the grade the stronger the bolt/nut. Also, the higher the grade, the higher the torque that can be applied.  Sometimes there are lines on the bolt head.

Have you ever wondered what the markings mean or the grade of the bolt?

The lines on the head of a bolt indicate its grade. SAE J429 (Society of Automotive Engineers) bolts have radial lines, whereas ASTM (American Society for Testing and Materials) uses a combination of letters and numbers to indicate the grade.

The standard American bolt is defined by the inch system designation. The bolt is identified by its diameter in inches, the pitch or number of threads per inch, the thread series designation, and the bolt length. ... However, metric bolt head size is measured in millimetres.

Grade 8.8: The high tensile steel is often referred to as the structural grade for bolts. It is the most common form of high tensile material and is usually stocked in plain finish or zinc.  8.8 bolts exhibit good tensile strength and perform well in most environments. 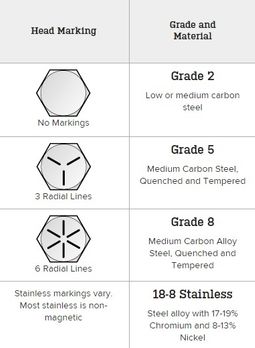 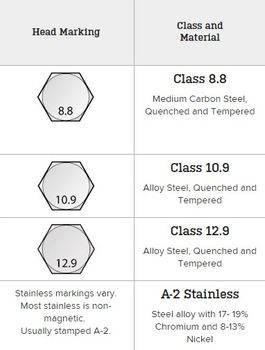 How do you measure a bolt?

Can different metals or bolts react with one another?

Various metals can react differently with one another and care should be taken when fixing them together.  Stainless steel is reactive with aluminium, and when a stainless steel screw is in contact with an aluminium base metal, the aluminium is likely to corrode.  Due to a phenomenon known as galvanic corrosion, some commonly used metals can cause accelerated corrosion when used with ZINCALUME® steel or COLORBOND® steel. Copper and lead are two such metals....

Stainless steel fixings and fixings containing copper should also not be used with ZINCALUME® steel or COLORBOND® steel.

How do lead and zinc nitrate react when put together?

The reaction won't occur since metals will only displace the ones below it from a solution according to the reactivity series, zinc would replace copper ions, but copper does not replace zinc ions. Zinc and lead nitrate react to produce zinc nitrate and lead.

Galvanized steel screws, however, are plated with a corrosion-resistant coating, usually consisting of zinc, that is not nearly as reactive with aluminium. The zinc plating prevents the underlying steel from coming into contact with the aluminium, and the risk of corrosion of the aluminium is reduced significantly.  See the chart below with metals that do and don't react with one another.

Low: No significant galvanic action is likely to occur.

Medium: Galvanic corrosion may occur under certain circumstances over a long period of time.

What are the three hand taps for cutting threads?

The three types of taps are Taper, Intermediate and Bottoming.  These three are the most common configurations for cutting threads by hand and are required in making the perfect female thread when cutting.  They’re available in the following thread types: Coarse, Fine, UNC, UNF and BSW.

What is the Taper tap used for?

The Taper Tap has quite a lot of chamfered threads to help it ease into cutting gradually and the taper also acts as a guide in starting the cutting action for the hole.   Typically, the first 8 to 10 threads are chamfered, with these taps being the most common type (often called “starting” taps) they are typically what you’d have in a Tap and Die Set.

What is the Intermediate tap used for?

The Intermediate Tap (sometimes called a “plug” tap) is in between the Bottoming and Taper Taps because it has 3-5 threads chamfered,  which is more than a Bottoming Tap but less than the Tapering Tap.  They are most widely used in through holes and where there is sufficient room at the bottom in blind holes.

What is the Bottoming tap used for?

The Bottoming Tap (often called the “finishing” tap) has almost no taper at the end because it is designed to thread all the way to the bottom of its reach.  Only 1 to 1.5 threads will be chamfered.  These are useful for threading blind holes, however it’s desirable to thread most of the hole with a Taper and intermediate taps first. What do the rings on hand taps mean?

The rings are there to quickly establish which tap you’re picking up and using in sequence.  The Bottoming Tap in most cases has no rings; however can sometimes have three being the third tap required in the process of cutting threads.  Then on the other end of the three; you have the Tapering Tap being the first required tap needed when cutting, it has one ring.  The Intermediate Tap has two rings indicating the second tap being used during cutting the perfect thread. (See diagram above)

What is the correct drill size for taps?

See a few examples below:

(If you require more specs or something more specific, like BSW; get in touch with one of our trained staff)

How do I work out Rivet sizing?

When working with rivets for the first time it can sometimes seem confusing understanding what the numbers mean, so therefore we thought we’d break it down to make it simpler.  Rivets are measured in inches based on the diameter of the rivet head and the maximum thickness of the material being riveted.  Therefore the first number refers to the diameter of the rivet in 32nds of an inch. The second number refers to the maximum grip length in 16ths of an inch. Therefore a size 45 rivet is 4/32" (1/8") diameter with a 5/16" maximum grip range.  (See diagram below)

What Metric drill bit would you use for a 4-5 Rivet?

We recommend a 3.2mm metric drill bit. (See diagram below)

If you can't find what your looking for here, get in touch with us and we'll source it for you.

"Not just nuts and bolts...

it's the shop that's got the lot"